The Parable of the Talents

14 “For it will be like a man going on a journey, who called his servants[a]and entrusted to them his property. 15 To one he gave five talents,[b] to another two, to another one, to each according to his ability. Then he went away.

19 Now after a long time the master of those servants came and settled accounts with them. 20 And he who had received the five talents came forward, bringing five talents more, saying, ‘Master, you delivered to me five talents; here I have made five talents more.’ 21 His master said to him, ‘Well done, good and faithful servant.[c] You have been faithful over a little; I will set you over much. Enter into the joy of your master.’

22 And he also who had the two talents came forward, saying, ‘Master, you delivered to me two talents; here I have made two talents more.’23 His master said to him, ‘Well done, good and faithful servant. You have been faithful over a little; I will set you over much. Enter into the joy of your master.’

24 He also who had received the one talent came forward, saying, ‘Master, I knew you to be a hard man, reaping where you did not sow, and gathering where you scattered no seed, 25 so I was afraid, and I went and hid your talent in the ground. Here you have what is yours.’ 26 But his master answered him, ‘You wicked and slothful servant! You knew that I reap where I have not sown and gather where I scattered no seed? 27 Then you ought to have invested my money with the bankers, and at my coming I should have received what was my own with interest. 28 So take the talent from him and give it to him who has the ten talents.

29 For to everyone who has will more be given, and he will have an abundance. But from the one who has not, even what he has will be taken away. 30 And cast the worthless servant into the outer darkness. In that place there will be weeping and gnashing of teeth.’  Matthew 25:14-30 (ESV)

I first heard that parable as a child, but I didn’t fully understand it until recently.  I believe that when God gives us a talent or skill and we hide it, even for fear of losing/wasting it, we actually upset God.  I don’t know about you, but I try my best to not put “Upset God” on my list of things to do in a day.

The theme of not wasting one’s talent has been ringing in my head lately.  It seems like everyone from Oprah on SuperSoul Sundays to Joel Osteen in his televised sermons, to my close friends, are talking about tapping into their talents.

I always thought that true talent had to be recognizable and could easily be demonstrated. Like a gifted singer/rapper can give 16 bars at a moment’s notice.  A skilled dancer can bust a move to any song.  A musician can play their instrument(s) of choice on command.  So if I had talent, I should be able to display it, if requested.  This frustrated me because I didn’t feel like I had a talent I could showcase without effort.

Although I took voice lessons and even taught vocal performance and music for a few years, I wouldn’t say that those are my talents.  I have also been taking dance classes since middle school.  I learned those things, just like Chemistry in high school.  I became good at them, thanks to enthusiastic and amazing teachers.  I even excelled at some (incl. Chemistry) and received awards and recognition.  Yet, I still didn’t consider myself to be talented in these areas, because they don’t come naturally to me.

I realized that the thing that does is writing.  I have kept a journal since I was in middle school.  I wrote monologues for competitions in high school (and won!).  I have a vivid imagination (fueled by my passion for reading), so making up or recounting stories is something I really enjoy.  It has become ingrained in me.  So much that when I am not writing, I don’t feel like myself.  Something is off, something is missing.

A little voice inside me has been whispering for a while.  In fact, it caught an attitude and is yelling now.  It’s saying that I have been burying my talent.  That I am not living to my full potential.  That I have been afraid and, in turn, selfish by keeping it all to myself.  It says that I am not honoring God because I am not using what I was given.  It also says that if I don’t use it, I will lose it.  I may anger God so much that he will take away my talent.  My inner voice is quite chatty.

I am a Daddy’s girl.  When I was younger, my father and I were inseparable.  Wherever he was, I most likely was too.  I literally stalked the man.  He didn’t discipline me much as I got older (my mother was the bad cop).  When I disobeyed him or did something he didn’t approve of, he rarely hit me or even punished me.  Instead, he would tell me how disappointed he was in me.  OUCH.  I cried worse then and wished he had just whooped me.

God is the same way.  The worst thing I can hear is that I am disappointing God.  When my time on Earth is over, I don’t want there to be a pile of “shoulda woulda couldas” left behind. I don’t want my dreams to die with me.  I don’t want my talents buried (rather cremated, because that whole rotting in the ground thing is not for me).  I want to hear “Well done, good and faithful servant.”  You didn’t waste your talent.  (Now, as for all the other bad things you did do…*pulls out scroll*)

A talent isn’t only expressed on a stage or shared with a large audience.  There are talented doctors, social workers, fitness professionals, etc.  Each one of us is equipped with something that we do better than anything else, and oftentimes anyone else.  We owe it to ourselves to discover what that is and to nurture it.  We owe it to the world.  Someone may be waiting for that specific talent.  A patient that needs your skilled hands, a child that will benefit from your gift of motivation, or a woman that hated her body until you showed her how to take care of it and to love it.  We are all here for a reason.  Don’t waste that time and, especially, your talent. 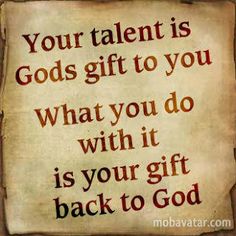