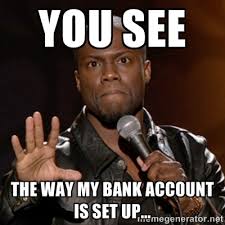 Kevin Hart has a hilarious joke about staying in his financial lane.  But thinking about my finances is no laughing matter.

My parents struggled financially & lived paycheck to paycheck up until retirement.  Somehow they made ends meet and raised three kids on meager salaries.  As immigrants with limited skills and education, they didn’t have much of a choice.

But I do.  Or at least I thought I did.  I was supposed to break the cycle of lack.  I have an extensive educational background. I went to 18th grade for goodness sakes!  I thought getting my Masters would lead to something.  It only resulted in student loan debt (I came out of undergrad owing about $700, after scholarships, grants and a tuition exchange program I was blessed to be eligible for because my father worked at a college/university in NYS).

The old guarantee that getting an education would equal getting a good job doesn’t seem to be as reliable these days.  College graduates are increasingly competing for the same limited number of well paying jobs.  For the ones that manage to find a job at all,  many are underemployed.  Not to mention all of the the mid-career workers jockeying for decent jobs. Many settle for entry-level or lower-level jobs that barely pay the bills, especially in NYC.

I have had my share of jobs, to say the least.  I was a teacher for a few years and made a good salary since it was at a charter school.  They typically pay higher than the Department of Education.  Yet, they worked you to the bone for every dollar.  I often put in 12 hour days and the school year was longer than other public schools.

But, I didn’t move to NYC to be a teacher.  I could have done that in Upstate NY (or anywhere else) and owned a house by now.  My passion for the entertainment industry just could not be suppressed.  So after that job, I started from scratch and interned (yes, for free) at a casting office and talent agencies.  That led to a FT job at a talent agency.  A year later, I landed a job at a TV network and I was hooked.

I am a bit obsessed with television programming.  I especially love TV movies and original series, specifically Dramas.  So when I was hired by my favorite network a couple of years ago, I thought I had hit the jackpot.

Yet, my salary leaves a lot to be desired.  This is NYC.  That nasty four letter word, r-e-n-t, has to be paid, as well as a plethora of other bills.  I also enjoy something called food and would like to continue consuming it daily.  Granted, I don’t have to eat out as often as I do, but there are so many amazing restaurants in this city.  Then there is the social scene, especially in the summer – fetes galore!

Plus, I have the audacity to want to travel.  Last year I went to four countries!  I went to Trinidad for Carnival, Haiti for a dance trip, Jamaica for a Mission trip (that was paid for by donations from amazing people) and Bermuda for Christmas.  I know traveling is a luxury (especially that many times in one year), but there is just far too much world out there to see. YOLO, right?

Maybe not.  I recently got a reality check.  My finances, or lack thereof, finally caught up with me.  I have never been the best at budgeting or saving, for the long-term.  I can save for a short-term goal (ie., all of those trips), but I fail miserably at putting away money for a rainy day.  I am learning, slowly but surely, to make that a priority.

The one bright side is that I don’t have credit card debt.  I learned my lesson very early on, after getting my first credit card in college.  I quickly charged up the card.  It was all good…until the bill came (womp womp).  It took me a while to correct my credit after that.   Now I do my best to use cards responsibly and to pay the balance monthly.

I am at a crossroads in my career (yet again).  I love the company that I work for now, yet I’m struggling to make sense of my salary.  I also am not in my ideal role.  I yearn to be doing something more creative.  The perks of the company and the connections I am making with leaders, creators and talent in the entertainment industry are priceless though.  But, if I was going to be a “starving artist”, then I might as well have stuck to auditioning and pursuing an acting career.

Something’s gotta give.  Because the way my bank account is set up…